A Plea for Peasant Proprietors: With the Outlines of a Plan for Their Establishment in Ireland

There is a 20% discount on bulk/wholesale orders (quantities of ten or more).  Shipping is extra.  Please send an e-mail to “publications [at] cesj [dot] org” for details. 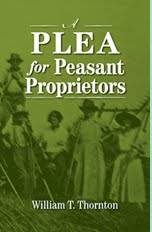 During the Great Famine in Ireland (1846-1852), William T. Thornton (1813-1880), an English economist, proposed that unused land be purchased by the government and sold on credit to families that would put it into production. In this way funds spent on famine relief would be turned from an expenditure into an investment, jobs would be created, and the benefits of widespread capital ownership would accrue to individuals, families and the nation. Although never adopted, later thinkers, offering a principled, growth-oriented approach for the 21st Century, refined Thornton's vision. As the global economy experiences ever-more-frequent downturns (with accelerating replacement of human labor by advanced technology, reinforced by flawed methods of finance that concentrate capital ownership in fewer and fewer hands) Thornton's book shines light on the path out of today's global dilemma. Originally published in 1848, this newly annotated and indexed edition of A Plea for Peasant Proprietors was prepared from Thornton's 1874 revision includes a foreword that examines a new framework for solving the global financial crisis, financing economic growth and enabling every citizen to become an owner of productive capital, as well as appendices explaining topical references and the political and economic environment within which Thornton worked.
Posted by Michael D. Greaney at 6:00 AM